Some days I don't even recognize my old self. I've changed so much in the past year - and for the BETTER! I'm in awe at the work the Lord is doing in our little family!
I clearly remember the day last February when the doctors and nurses at Amplatz Children's Hospital discharged us and sent us on our way saying "you've got this mom!"  Part way through our 5 hour drive home we stopped for lunch, but mostly to hook Charlotte up to her feeding tube. I vividly remember bursting into tears in the middle of the restaurant because I was struggling with her tube and pump. I was certain I was going to do something wrong and hurt my new daughter.
Fast forward 9 months. Today I hear Charlotte fussing down the hall. Going to investigate I find her g-tube button on the floor with formula and blood dripping down her belly. Instead of bursting into tears, like I did 9 months ago just hooking her up, I merely hollered down the hall at Eden to bring me Charlotte's emergency kit. 3 minutes later she's all patched up, new button in place, and back to normal. Time to get lunch on the table.
If someone would have told me all the twists and turns our lives would have taken this year I would have laughed and never believed them. I'm so glad the Lord didn't reveal it all to us in the beginning. I think I would have been too afraid to follow His leading in our lives. I am so thankful for His grace and strength in my everyday.
"I am not saying this because I am in need, for I have learned to be content whatever the circumstances. I know what it is to be in need, and I know what it is to have plenty. I have learned the secret of being content in any and every situation, whether well fed or hungry, whether living in plenty or in want. I can do all this through him who gives me strength." (Philippians 4:11-13 NIV) 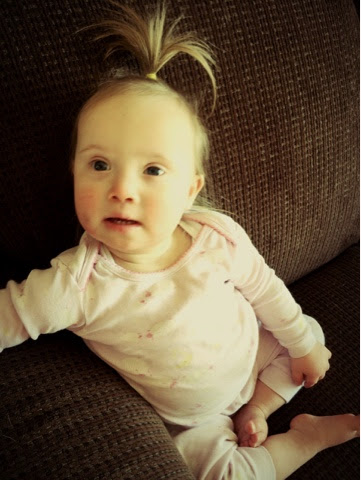 Let me catch y'all up to speed on what's been going on with Charlie Jo.  This might be a long one.  I have been meaning to update for quite awhile, but time keeps sneaking away from me.  Most of the updates have to do with her medical needs, so let me get started... 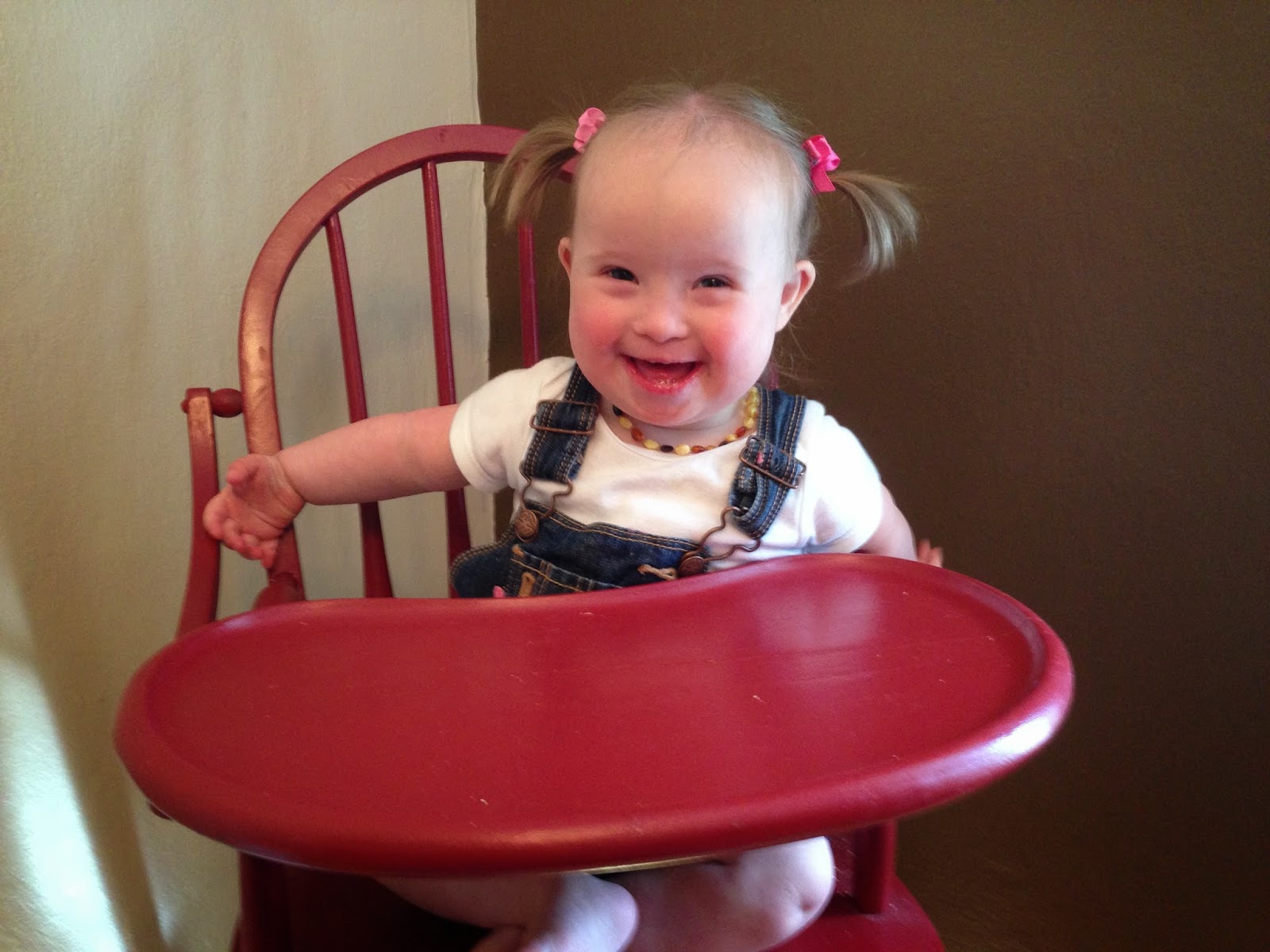 One thing most of you are unaware of is shortly after arriving home Charlotte received a diagnosis of Hepatitis B.  We were pretty shocked in the beginning.  We knew very little about Hep B and didn't know what it meant for her future.  Our wonderful pediatrician here at Altru ran some more tests, answered a bunch of my questions, and made us a referral to a specialist in Fargo.  Unfortunately that appointment was 6 months out.  Yes, 6 months to wait to get answers.  Our ped ran blood work occasionally, mostly to monitor her liver function.  We read up on it, talked with other adoptive moms who had children with the same diagnosis, and learned all we could learn.  Fast forward 6 months and we finally met with the specialist.  He ordered a ton of test.  These were the tests that took 5 attempts to get.  Twice they didn't draw enough blood, once I requested they draw the lab while she was under general anesthesia during an MRI (more on that later) but the phlebotomist accidentally pulled out Charlotte's IV so they had to wake her up, once they just couldn't get enough blood and I made them stop.  Fifth time was a charm.  Poor baby!

Anyway, all the poking was totally worth it!  After multiple tests, it was determined that Charlotte does NOT have Hep B and it also showed that she never had Hep B.  Praise Jesus! Apparently there will be an investigation of the lab because false positive Hep B tests like the ones they did for Charlie are unheard of.  If nothing shows up in the lab apparently she may get to be a rock star of medical journals.  I'll chalk it up to a miracle. 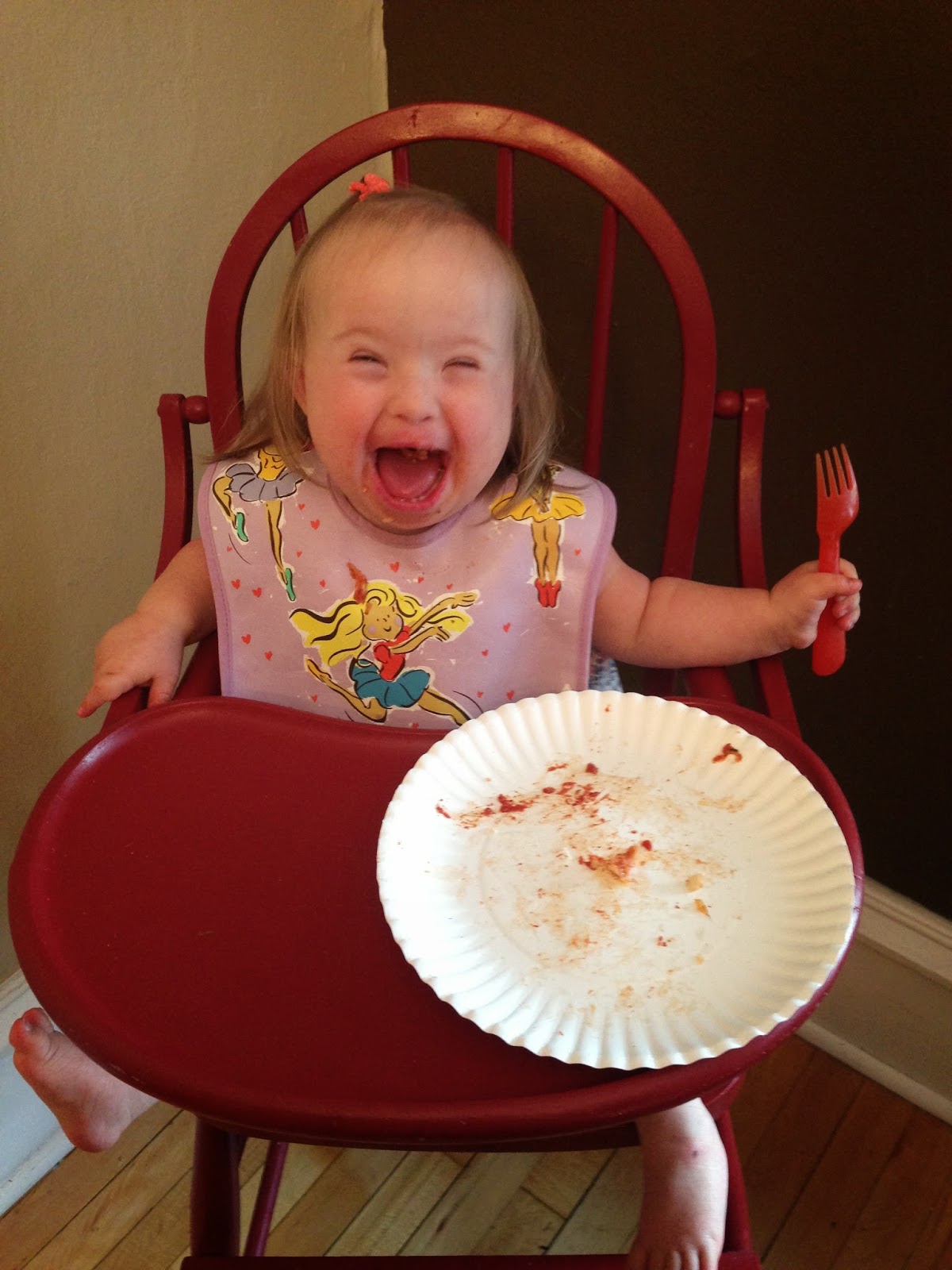 Another big test that occurred was testing for seizures.  Charlotte has always displayed an odd tick.  She will roll her eyes up and to the left.  I didn't think much of it, but apparently because the tick was always exactly the same it needed to be investigated.  She had an MRI and an EEG completed.  Thankfully both those tests came back unremarkable.  Yay! The neurologist said it still may be seizure activity, but it isn't causing any issues neurologically.  He said it will likely resolve on its own by age three.  He offered to start her on anti-seizure medicine, but we declined because it isn't causing any issues for her so why introduce a medication.  Thankfully our doctor felt the same!  It also ruled out any issues with her skull itself.  Charlotte's fontanelle is still open, which is odd for her age.  We are thankful that there aren't any noticeable issues and we will just have to watch and see what happens.  It is likely due to her lack of nutrition early on. 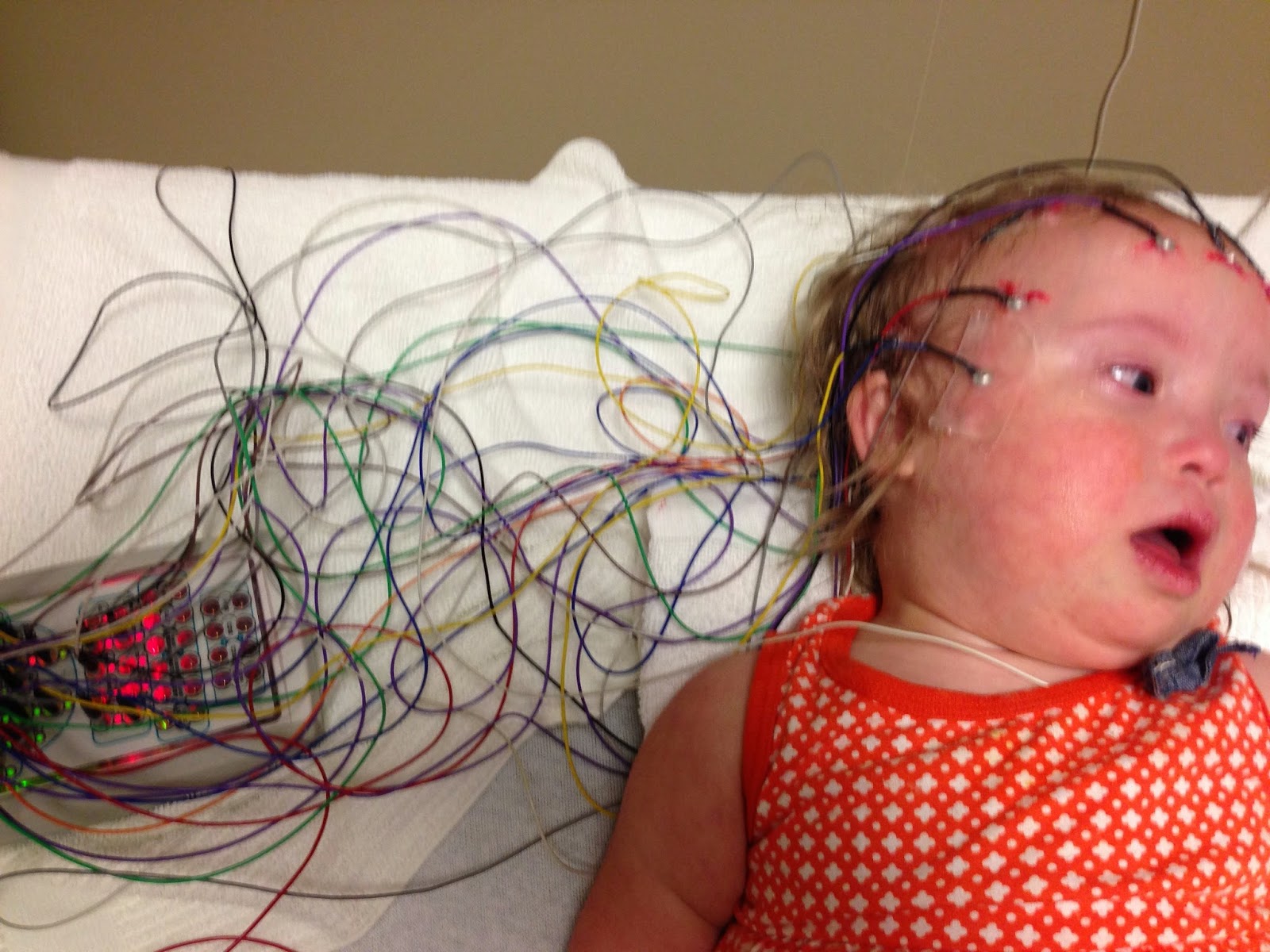 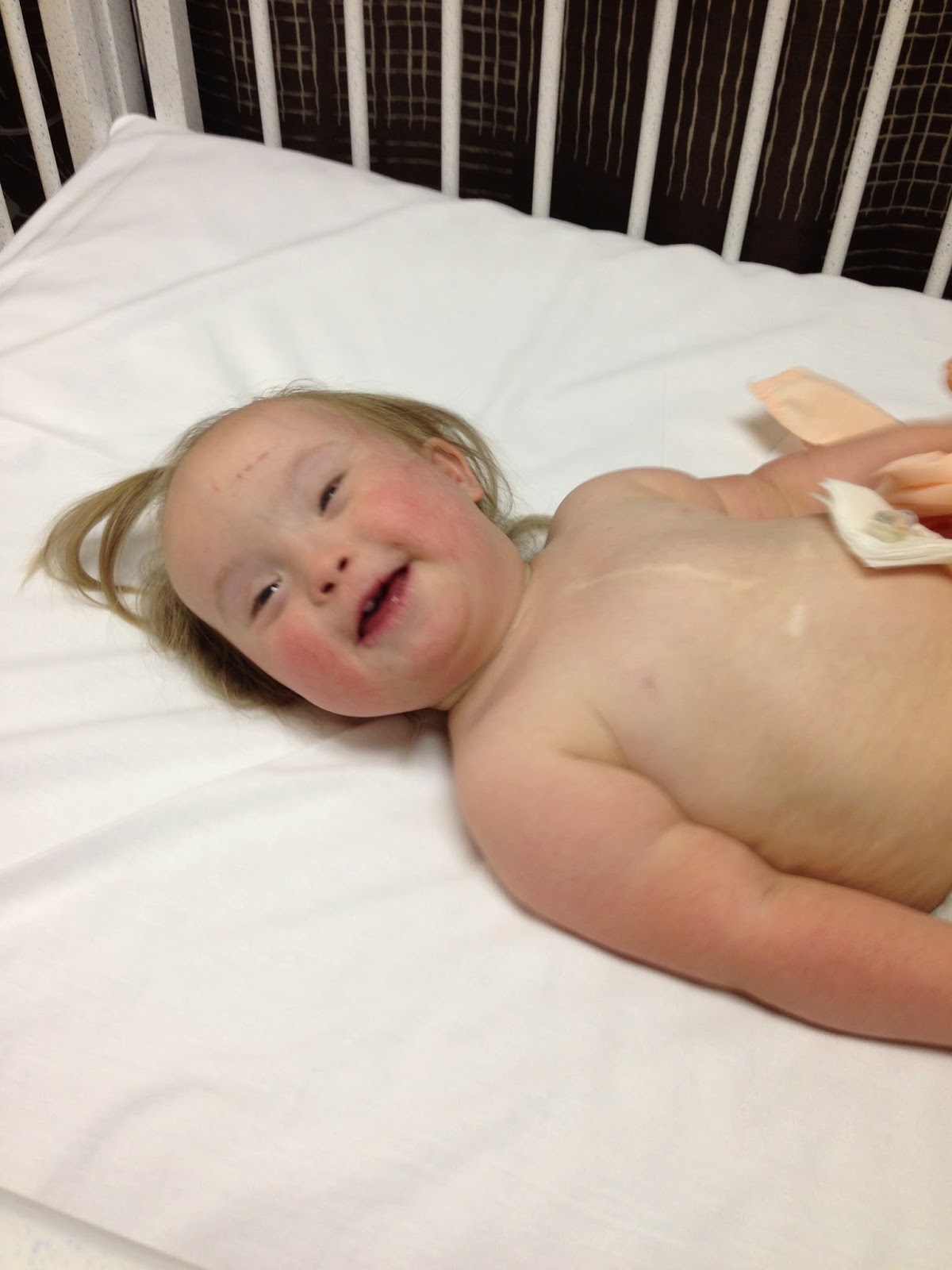 Another big thing that happened was we had a little cancer scare. Because Charlotte has Trisomy 21 she has a 10-20 times higher likelihood of developing Leukemia.  We noticed that Charlotte had some petechia on her arms.  After a couple weeks I finally took her to her pediatrician.  He didn't think much about it at the time and told me to just monitor it.  A couple weeks later and it was not getting any better, it was actually getting worse and spreading.  Petechia can be a sign of Leukemia.  I took her back to the ped and he was now more concerned.  He ran some lab work and the results further concerned him.  He called down to Roger Marais Cancer Center and got one of their docs involved.  I visited on the phone with one of the cancer docs and he was concerned, but not overly concerned.  He had set up to have a bone marrow biopsy done the next day, but later that afternoon he changed his mind.  He knew we were coming to Fargo in 4 days to see the specialist about her Hep B so he ordered labs to be done at that time.  He asked us to just walk over to the cancer center after our other appointment.

Ok, let's be honest here, being in a pediatric cancer center is pretty scary place.  Very scary actually.  It kind of shook me up a bit.  I don't like to think about the reality of having a child with cancer.  Those kids and parents are incredibly brave.

We waited for a long time and he finally came back and said we were much too boring to be seeing him! Yippy!! It was determined that Charlotte had a very wonky reaction to a virus and likely has fragile platelets. 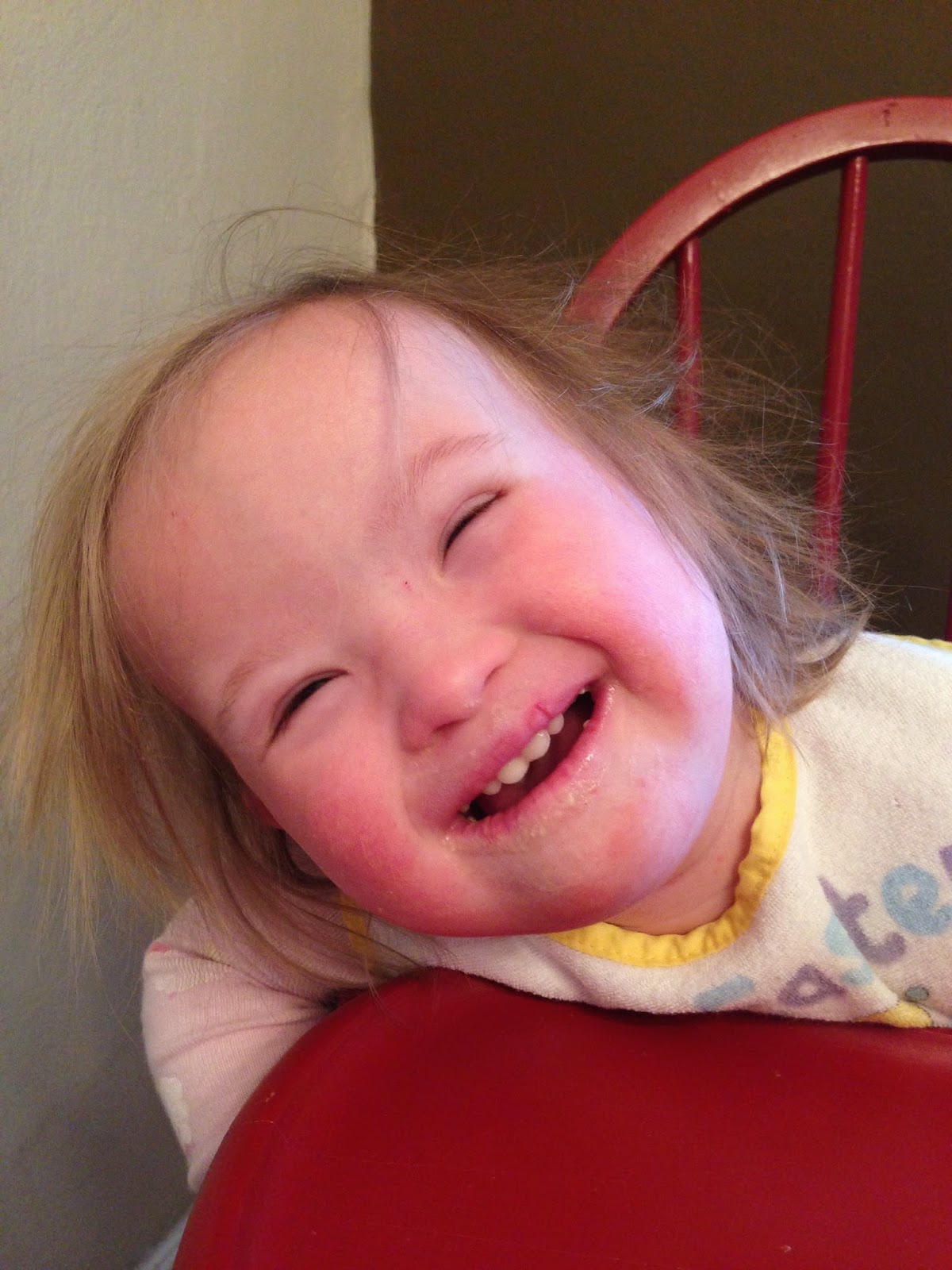 I'm likely always going to get anxious about that darn petechia.  Leukemia is forever going to be in the back of my mind.  I will try not to worry about it.  I will pray frequently about it.  And we will just roll with it like everything else.

I'm sure very few of you made it to the end of this incredibly long post.  It's been a CrAzY couple months around here.  But, the whole point of all this rambling is to say Charlotte is doing GREAT! She is healthy, happy, growing, eating a ton on her own, bonding, playing, talking, signing,  and on and on and on! She is a true delight! 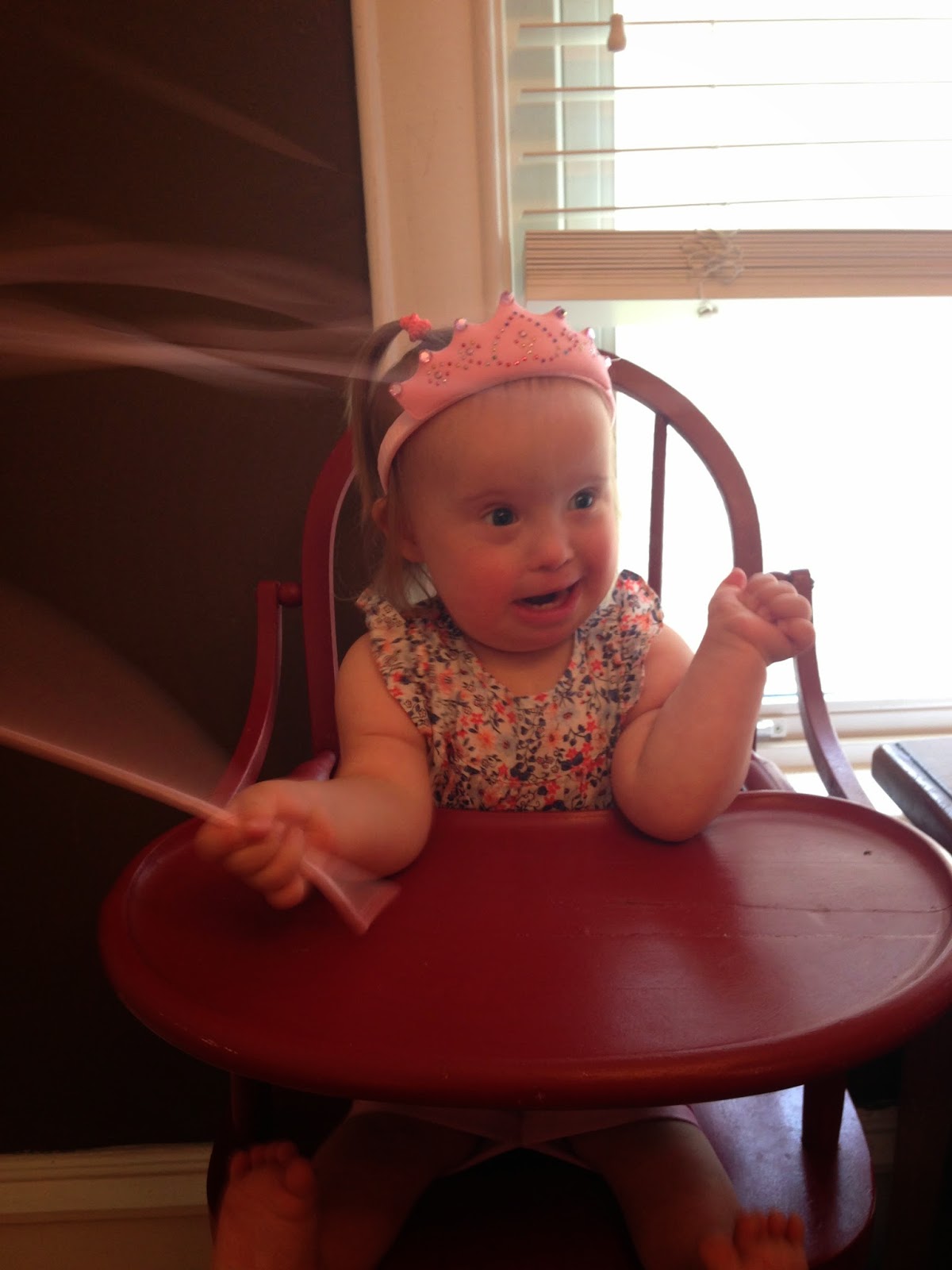 I put my five bigger kids all to bed and scooped Maisie Jane up in my arms. Secretly I was very much wishing I could just go put her to bed as well. I'm tired. I wanted to just sit quietly on the couch and attempt to organize the chaos that is my thoughts. But, I knew she wasn't tired yet, so I made the choice to continue putting one foot in front of the other and continue to do the next right thing (not that snuggling that sweet thing is such an awful chore, but y'all get what I'm saying 😉) and boy was I rewarded tonight. This little stinker is soooo stingy with her smiles. I thought she'd never crack that smile, but a couple weeks ago she FINALLY did!  Tonight she was locked on her momma's face soaking in every word I spoke. We were loving it and then it happened...her first giggle. The sweetest sound.  It was nothing more than just an outpouring of love. For those of you who say my hands are just too full of kids...if only you could just catch a glimpse of our hearts. All eight just pour over with love. 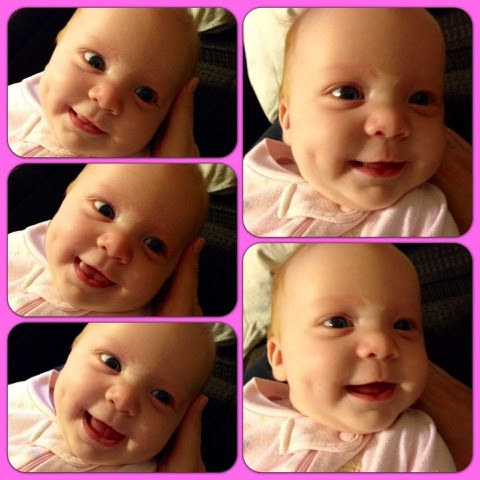